The dream to create Sunrise Studios begun in late 2018, from the back bedroom of a quaint fisherman’s cottage in Kessingland. Deciding further education was not right for him at the time, aspiring cinematographer Joshua Freemantle applied and successfully received an East Anglia Art Fund grant to create and produce a community documentary on Lowestoft – the most easterly town in the UK.

Edited for release in mid 2020, the documentary ‘Life of Lowestoft’ finally premiered in autumn due to COVID-19, and has since achieved a ‘Best Documentary’ award by Flight Deck Film Festival.

In early 2021, whilst interviewing regional charity (Access Community Trust) CEO Emma Ratzer MBE for an informative podcast, Joshua mentioned at length with her about ultimately creating Sunrise Studios as a social enterprise, which would go on to benefit many young people like himself in the future. Captivated by Joshua’s passion, Emma invited him to present an official business proposal to achieve his ambition and a month later, a formal plan was unveiled.

Impressed by Sunrise’s long-term goals, Access Community Trust has since invested in Joshua’s potential through it’s ‘YOU’ (Youth Outreach United) programme, by offering him full time employment and the opportunity to create his Studios within the charity’s already successful social enterprise framework, including office space, further education, mentoring and a clearly planned pathway to dream realisation.

We can't wait to work with you & make waves

Get the latest news and updates from Sunrise Studios 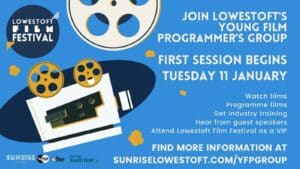 This week, local cinematographer Joshua Freemantle received welcomed news he has been hoping for, as his dream to create a community production company has moved one-step closer to fruition.

Did You Know We Offer Commercial Services?

Click below to drop us a line or find out more

Sunrise Studios is a community production company part of the Access Community Trust family located on the Sunrise Coast in Lowestoft.